The Night Parade of One Hundred Demons show opened up last Friday, and it’s been a great success so far. Everyone’s reactions have been very interesting — from kids insisting that they aren’t scared while gritting their teeth and refusing to look anywhere but at the floor, to adults doing pretty much the same thing. I’m really enjoying meeting fans and hearing what they have to say about the book. One family brought in their tattered copy for me to sign. Their kids love it so much they take it everywhere they go, and it looked like it could have been 20 years old instead of only a couple of months.

Here are a couple of articles about the show. The first one is from Urala, Fukui prefecture’s monthly magazine. They got my website address wrong (.com instead of .net), but oh well. The article looks nice anyway, and it’s an honor to be in Urala:

On the first day of the show, a reporter who really loves yokai came from the Fukui Shinbun to take some photos and write an article. He was squirming and making faces while reading each yokai description, and letting out yelps and shouts. But he stayed for an hour and came back again later in the day. He said really enjoyed the show, and he wrote a great article to go with it: 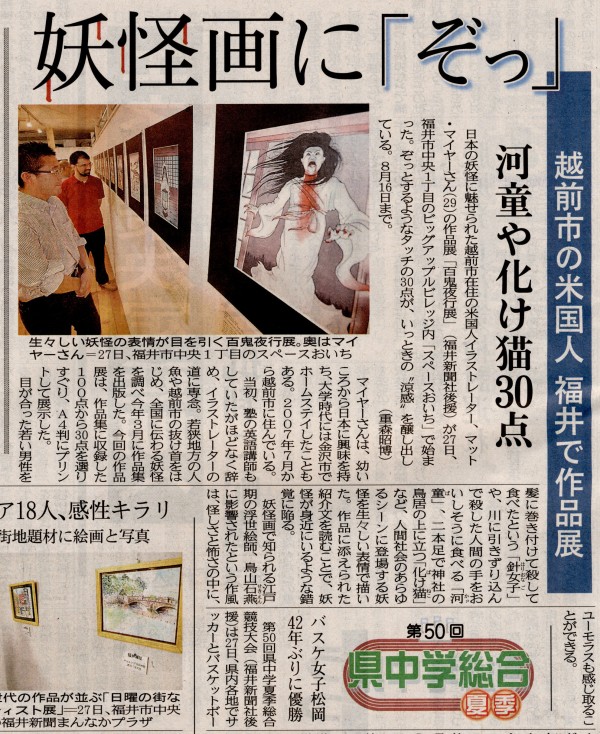 If you haven’t come to the show yet, please do! I’ll be there every weekend and sporadically throughout the week until August 16th!